Faraway, so close. Sometimes I seek the far horizons, those wide-open steppes of Central Asia, only to look around the corner and find the open grasslands of the High Plains of North America. What is the difference between these ecologically similar but geographically distant landscapes? One answer is three thousand years of cultural history.

Open range. I was born and raised in the western US, both in the steel, concrete, and glass of large cities and the open landscape of the front range of the Rocky Mountains. Fields of prairie grasses interspersed with creosote and sage were common and from my young perspective these systems were the natural way the steppe country of the High Plains should look. We take for granted the landscape of our mind’s eye as the way the landscape has looked backward into the past, but this is often not true, particularly today with rapidly changing land uses. In the case of the western US, cattle and sheep, non-native grazers made their way to the high steppes of the Rocky Mountain region in the mid to late 1800s. The settlers and ranchers who brought cows and sheep to this surprisingly fragile landscape also brought their European land ethic. This land ethic was based on millennia of herding in a different world. The new world was full of people, native grazers, and prairie ecosystems that had evolved in ways unknown to the new arrivals.  Once let free to graze, these herds laid waste to much of the ecosystem, opening the way for aggressive species such as creosote and sage to out compete the dwindling biodiversity of short and mixed-grass prairie plant species. In other words, the landscape of my youth was a relatively recent scape that heralded the extirpation and extinction of native species. 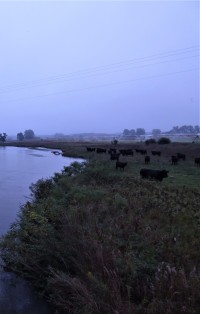 Open herds. My first expedition to Mongolia was in the mid-1990s, not long after the dissolution of the Soviet hegemony. Mongolia was its own country for the first time in 70 years. Shortly after arriving, my eyes feasted on Northern Mongolia’s wide-open valleys, Gers (also called Yurts), mixed herds of yaks, sheep, goats, camels, and horses, and landscapes without fences. Try it sometime, go to an open range without any fences, it will take you a while to identify what is so different, so foreign. Our expedition could travel anywhere, a feature of our research that facilitated sampling biodiversity from Lake Hövsgol and then, over the years, sampling from lakes and streams of a large proportion of the country. A land without fences allows herders to move their herds to good pasture, to move them away from stream bottoms where their hooves may destroy the riparian system lining lotic systems. A land without fences makes neighbors out of all of us, makes us all caretakers of our common natural resources. This system of open range herding with herds moved seasonally is called pastoral nomadism. The herders were not nomads, but rather were connected to a set of lands they would frequent for the betterment of their herds and thus for their own welfare. This form of livelihood and land use may go back as far as 3000 years before present. Yes, this means that during the years when Genghis Khan and his people ruled the largest empire on Earth most people of those lands now called Mongolia were pastoral nomads, herders in a landscape without fences.

Don’t fence me in. Three thousand years ago the grassland steppes of the North American High Plains did not have fences either. In fact, this region was not fenced in any comprehensive sense until the invention of barbed wire fencing in the 1870s. Fencing and land ownership is not a cultural constant but rather varies by group. Prior to European settlement, the High Plains were inhabited by at least eight tribes who had many different cultures and types of land ethics, although most were not herders. Many tribes did manage the dominant grazer in the region, the North American Bison. Bison cut wide swaths across the landscape, grazing, drinking from streams and rivers before moving on in a small and large cycles across space and time. These large herds were dominant until relatively recently with the last large herds decreasing rapidly by the 1870s and through the 1880s. Until that time, the grassland ecosystem was driven by bison herds in conjunction with human burning of prairies and other land management that marks the prairies even today. In comparison, as recently as 200 years ago the North American steppe and the Central Asia steppe existed without fences, but each region differed in how grazers were managed, differentially affecting the landscape.

Along came the settler. The loss of cultural and ecological diversity in North America resulting from the advent of the European land use practice cannot be overstated. In rapid succession, the High Plains lost most Bison, tribes, and ecological integrity. Overgrazing of sheep followed by cattle changed the landscape, in some cases drastically. Overgrazing can lead to open areas of soil that are susceptible to drying, increased albedo and these regions can spread leading to localized drying, accelerating the decline of the prairie ecosystem. These changes have been altering the High Plains for over a century, albeit with some better conservation, natural resource management, and ranching practices stemming the loss and, in some cases restoring ecosystems in minor ways. More recently, overgrazing has been impairing grassland ecosystems in Mongolia. Changes in the proportion of Cashmere producing goats in herds, an increase in cattle relative to yaks and sheep have intensified grazing to levels that damage the prairies. Soil compaction, increased albedo, destabilized stream banks are all exacerbated by increasingly severe whether such as violent summer storms and dzuds (severe winter storms). If you live off the land such as a rancher or a pastoral nomad does, these changes, whether self-inflicted or not, are the harbinger of change and loss. These changes also link land use from one side of the world to the other.

Convergence. Strangely, land use and management of steppes in both North America and Mongolia are converging. At one time, both lands were characterized by culturally diverse groups of people who managed their grazers in different ways. Their land use diverged and now is becoming similar again. Perhaps North American natural resource managers can learn by studying the function of Mongolian steppe prairie and river ecosystems, those that have not been overgrazed and can still serve as reference to a time when ecosystems were less impaired by human activities. Perhaps Mongolian herders can learn from the mistakes North American ranchers made in the past when allowing for the overgrazing of short and mixed grass prairies. Perhaps there is a reason that when seeking those faraway places, we need to just look around our own landscapes to find the common beauty and convergent history between geographically disparate places.

Lkhagvadorj, Dorjburegdaa, Markus Hauck, Ch Dulamsuren, and Jamsran Tsogtbaatar. “Pastoral nomadism in the forest-steppe of the Mongolian Altai under a changing economy and a warming climate.” Journal of Arid Environments 88 (2013): 82-89.