Big Questions. Asking big questions in science is fascinating and transformative. Macrosystems research by its very definition asks and answers big questions on how large scale ecosystems function. How large is this scale? Well the questions examine functions at landscape scales spanning thousands of square kilometers and temporal scales spanning decades to millennia. So, large, very large. For example, how do large river ecosystems function within and between continents? This question is the focus of the MACRO rivers project. This ambitious and exciting project seeks to synthesize functionality of large rivers from the smallest inhabitants to the largest processes. The MACRO project asks how rivers respire or breath, in other words what is the system metabolism of the river. The project asks what the structure of the river is, in other words what is its hydrogeomorphology. And the project asks what its function is, in other words what roles to the living forms of the rivers play in creating a functioning whole. Finally, the project asks how the food web functions at these different scales.

Two Continents. Large rivers of North America and Central Asia are the focus of the study, specifically rivers in the United States and Mongolia. Asia and North America separated around 200 million years ago and the last land bridge across what is now the Bering Strait was covered by sea level rise around 11,000 years ago effectively separating the two continents. Central Asia and North America differ in geological history. Tectonics, volcanism, and mountain building carved different landscapes, exposed different rock strata, created different soils. Large scale geological events of this magnitude drove biogeographic separation of the life forms, diversifying flora and fauna. Thus, the species on the two continents are very different. And human societies were very different. Differential uses of the land ranged from bison hunting and management by Plains tribes to ranching and row crop agriculture in the United States of North America and ranged from a 4000 year tradition of pastoralism and herding to collective farming followed by a swift rise of urbanization in Mongolia. So, how do rivers function in these two different landscapes? And what are the similarities in these rivers? 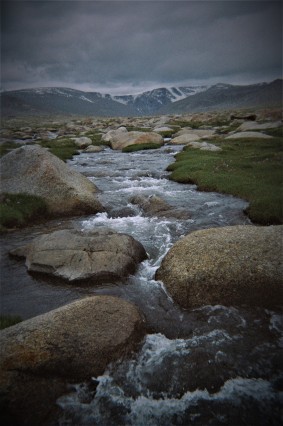 A River Runs Through It. Theories are amazing constructs in science. They have the power to explain and predict and if they fail, then we rebuild them or start over until an overwhelming body of facts, of evidence support their continued use. And then we find different ways to explain and predict and compare these different theories and perhaps start all over again. Yes, science is dynamic, and scientists must keep an open mind to keep up with all this dynamism. Can we explain and predict how rivers work along a continuum? The River Continuum Concept is a theory that explores the relationship between function, form, and biodiversity of the river from the slow, small trickles of the headwater regions to the largest reaches of the rivers as they form a confluence with other rivers or flow, as most rivers eventually do, into the sea. The RCC was first published in 1980 and since then has been modified and tweaked as new facts, as new evidence made such modifications and tweaking necessary. But perhaps there is another way to explain and predict how rivers function.

Patchworks, the River Quilt. Rivers may function as a network of patches, effectively a dis-continuum of functionality within riverine networks. The Riverine Ecosystem Synthesis concept examines these patches, called functional process zones. These patches should be similar enough between rivers to explain and predict river functionality at the multiple spatial and temporal scales of a macrosystems study. The focus of the MACRO rivers project is on four major functional process zones.

The high elevation, low energy zone is exemplified by the slow, meandering stream in a mountain meadow.

The high elevation, high energy zones are those patches of the river that are confined by the landscape with a strong elevational gradient. Think river rapids flowing through a mountain canyon.

The low elevation, low energy zones are where the rivers flow out into the plains or steppes, slowing down and spreading out.

Low elevation, high energy zones are parts of the river that may be confined as they flow through the foothills or steppe valleys.

The changing anatomy or morphology of the river reaches in these different zones should result in changing physiology or energetics, differing functionality of the life forms, and differing few webs. But simply studying functional process zones across continents may confound the comparisons, so rivers are compared from similar regions within the two continents.

Biome to Biome, Steppe to Steppe. The great grasslands of North America and Central Asia rise toward towering mountains in steppes. Mountain chains in North America include the Rocky Mountain, Sierra Nevada, and Cascade ranges. Mountain chains in Mongolia include the Khentii, Khangai, and Altai ranges. And steppes include open steppe, mountain steppe, and desert steppe systems. Although these steppe systems have a different geological and human history, they may function in similar ways as may the rivers that run through them.

Thus, the MACRO project selected rivers for comparison in three distinct and interesting regions of the two continents: the open steppe grasslands (tall grass to short grass prairies), the mountain steppe, and the semi-arid steppe of endorheic basins. Perhaps the best studied of these systems is the mountain steppe involving those rivers so familiar to us, the Yellowstone River of North America and the Selenge River of Mongolia. Less well studied are the great grassland rivers of the world such as the Little Missouri River of North America and the Onon River of Mongolia. Endorheic basins are low areas in a continent, rivers flow into them but not out. The watersheds do not connect to the sea, instead rivers flow into large evaporative lakes. The MACRO project compared rivers from the Great Lakes basin in Mongolia to rivers from the Great Basin in North America.

More to Come. Creating and testing another powerful theory to explain how rivers function is important work, but in the end both the River Continuum Concept and the Riverine Ecosystem Synthesis zones will help us understand rivers. This understanding helps natural resource managers manage the rivers for our use and for sustainability in rapidly changing climates. The MACRO rivers project is still in the sampling stage of research. As research is published the resulting synthesis of the physiology, anatomy, and functionality may tell us how changes to rivers affect function and how best to maintain these functions for the natural and human uses of the rivers in years to come. Next up? How does the human element play out in the MACRO rivers project?